THE PLACE TO FIND YOUR NEXT TATTOO 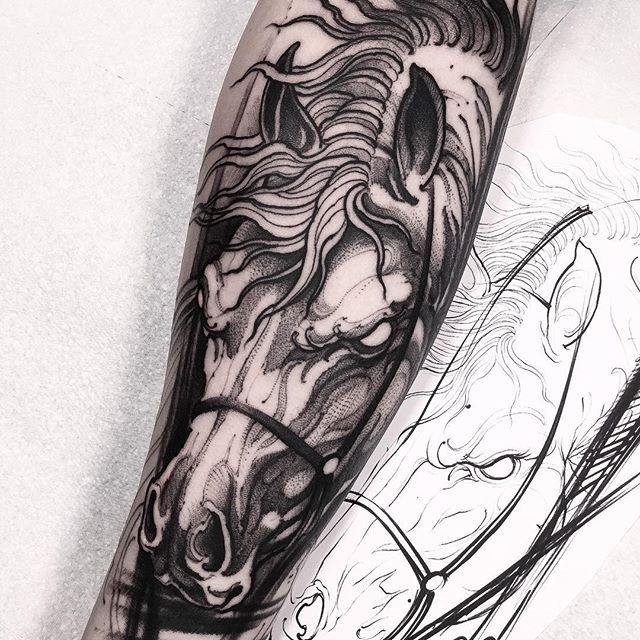 Pegasus, the mythical winged horse, the one who helped heroes through all greek mythology to combat various opponents and best multiple trials, deserves its own recognition when it comes to ink on skin. For anyone dreaming of being unshackled and flying free in the sky, this piece may bring you closer to opting in for the Pegasus Tattoos you never knew you wanted.

Pegasus is one of the two children of Poseidon and Medusa. He and his brother, Chrysaor, sprang forth from Medusa’s head when Perseus decapitated her.

So what does it mean to wear a Pegasus Tattoo? For one, whenever the mention of Pegasus’s name is brought up, people instantly think of the freedom the wings give Pegasus. The freedom to be unchained, capable of flying and traveling great distances.
Maybe this feeling is what everyone is missing or searching for in life. The ability to have no burdens and to fly as high as your “wings” allow you.

Bellerophon , the Greek hero was capable of many legendary feats but mostly due to being on the back of Pegasus. At some point, his hubris caught up to him, and considered himself above his peers, almost like a god. He tried to fly on top of Pegasus towards Mount Olympus, but Zeus became angry with him, and sent a gadfly and stung Pegasus, thus throwing Bellerophon to Earth and his demise.

A suitable companion can rise the feeling of greatness in you, and make you feel like you’re floating on cloud nine.

After Bellerophon fell, Pegasus was stabled in Olympus, and throughout countless feats accomplished, Pegasus became a constellation by Zeus’s grace.

Pegasus is represented in major works of art as charging with his wings spread out, always ready to charge at the enemy. The visage of Pegasus the winged horse is said to represent the image of a wise animal, inducing a state of awe with his presence.

One of the oldest works of art is of Bellerophon riding Pegasus, vanquishing the mighty Chimaera, the monstrous beast with the head of a lion, body of a giant goat, and instead of a tail that has a snake’s head. A good tattoo artist would have a field day trying to ink such scenery on a person’s body. Challenging but very rewarding.

If you’re more of a stargazing person, we recommend tattooing the constellation of Pegasus on your body. The stars are sure to wear you good luck and guide you in your future endeavors.

So whether you feel that deep inside of you, you are searching for true freedom, or you simply love the stories surrounding the immortal horse, then Pegasus might be the right choice for you for your next tattoo project.

Just remember, these tattoos are here to be used as inspiration, it ultimately comes down to the person that will wear it, and the artist’s vision and skill, and just remember, make your next tattoo unique!

If you enjoyed these Pegasus tattoos then Click on the links below for more amazing galleries of different gods and their mythologies.

Buy Me A Coffee

We use cookies on our website to give you the most relevant experience by remembering your preferences and repeat visits. By clicking “Accept”, you consent to the use of ALL the cookies.
Do not sell my personal information.
Cookie settingsACCEPT
Manage consent

This website uses cookies to improve your experience while you navigate through the website. Out of these, the cookies that are categorized as necessary are stored on your browser as they are essential for the working of basic functionalities of the website. We also use third-party cookies that help us analyze and understand how you use this website. These cookies will be stored in your browser only with your consent. You also have the option to opt-out of these cookies. But opting out of some of these cookies may affect your browsing experience.
Necessary Always Enabled
Necessary cookies are absolutely essential for the website to function properly. These cookies ensure basic functionalities and security features of the website, anonymously.
Functional
Functional cookies help to perform certain functionalities like sharing the content of the website on social media platforms, collect feedbacks, and other third-party features.
Performance
Performance cookies are used to understand and analyze the key performance indexes of the website which helps in delivering a better user experience for the visitors.
Analytics
Analytical cookies are used to understand how visitors interact with the website. These cookies help provide information on metrics the number of visitors, bounce rate, traffic source, etc.
Advertisement
Advertisement cookies are used to provide visitors with relevant ads and marketing campaigns. These cookies track visitors across websites and collect information to provide customized ads.
Others
Other uncategorized cookies are those that are being analyzed and have not been classified into a category as yet.
SAVE & ACCEPT